What's NYT.com Worth To You, Part II

OK, with the response curve for my survey tailing off, I'm calling it.  Here, dear readers, is what you said (click on the image to enlarge it): 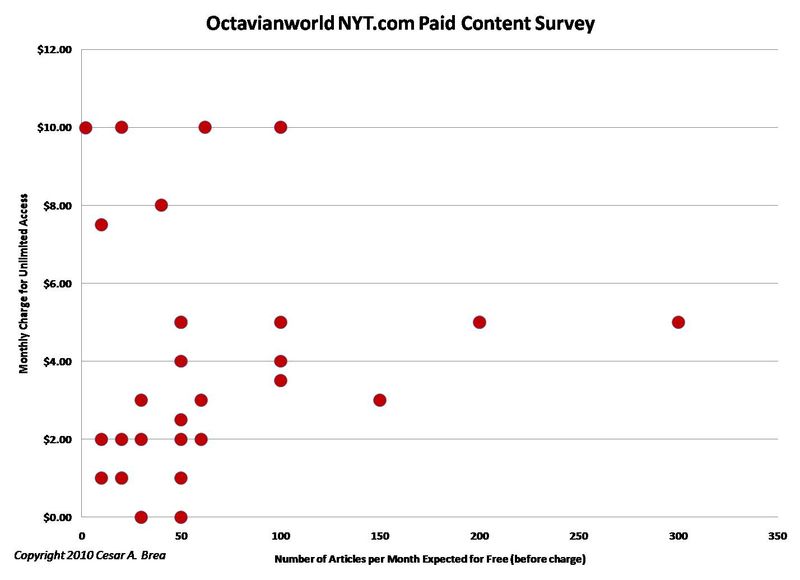 (First, stats: with ~40 responses -- there are fewer points because of some duplicate answers -- you can be 95% sure that answers from the rest of the ~20M people that read the NYT online would be +/- 16% from what's here.)

90% of respondents would pay at least $1/month, and several would pay as much as $10/month. And, folks are ready to start paying after only ~2 articles a day.  Pretty interesting!  More latent value than I would have guessed.  At the same time, it's also interesting to note that no one went as high as the $14 / month Amazon wants to deliver the Times on the Kindle. (I wonder how many Kindle NYT subs are also paper subs getting the Kindle as a freebie tossed in?)

Only a very few online publishers aiming at "the general public" will be able to charge for content on the web as we have known it, or through other newer channels.  Aside from highly-focused publishers whose readers can charge subscriptions to expense accounts, the rest of the world will scrape by on pennies from AdSense et al.

But, you say, what about the Apple Tablet (announcement tomorrow! details yesterday), and certain publishers' plans for it?  I see several issues:

The most creative argument I've seen "for" so far is that pushing today's print readers/ subscribers to tablets will save so much in printing costs that it's almost worth giving readers tablets (well, Kindles anyway) for free -- yet another edition of the razor-and-blade strategy, in "green" wrapping perhaps.

The future of paid content is in filtering information and increasing its utility.  Media firms that deliver superior filtering and utility at fair prices will survive and thrive.  Among its innovations in visual displays of information (which though creative, I'd guess have a limited monetization impact) is evidence that the Times agrees with this, at least in part (from the article on Times R&D linked to above):

When Bilton swipes his Times key card, the screen pulls up a personalized version of the paper, his interests highlighted. He clicks a button, opens the kiosk door, and inside I see an ordinary office printer, which releases a physical printout with just the articles he wants. As it prints, a second copy is sent to his phone.

The futuristic kiosk may be a plaything, but it captures the essence of R&D’s vision, in which the New York Times is less a newspaper and more an informative virus—hopping from host to host, personalizing itself to any environment.

Aside from my curiosity about the answers to the survey questions themselves, I had another reason for doing this survey.  All the articles I saw on the Times' announcement that it would start charging had the usual free-text commenting going.  Sprinkled through the comments were occasional suggestions from readers about what they might pay, but it was virtually impossible to take any sort of quantified pulse on this issue in this format.  Following "structured collaboration" principles, I took five minutes to throw up the survey to make it easy to contribute and consume answers.  Hopefully I've made it easier for readers to filter / process the Times' announcement, and made the analysis useful as well -- for example, feel free to stick the chart in your business plan for a subscription-based online content business ;-)  If anyone can point me to other, larger, more rigorous surveys on the topic, I'd be much obliged.

The broader utility of structuring the data capture this way is perhaps greatest to media firms themselves:  indirectly for ad and content targeting value, and perhaps because once you have lots of simple databases like this, it becomes possible to weave more complex queries across them, and out of these queries, some interesting, original editorial possibilities.

Briefly considered, then rejected for its avarice and stupidity: personalized pricing offers to subscribe to the NYT online based on how you respond to the survey :-)

Postscript: via my friend Thomas Macauley, NY (Long Island) Newsday is up to 35 paid online subs.

Listed below are links to weblogs that reference What's NYT.com Worth To You, Part II: