#Watson Wins #Jeopardy! The Singularity Is Near(er): Are You Ready for Computational Engine Optimization ("CEO")?

Saw the news (though missed the show) that IBM's Watson won on Jeopardy.  Interesting to see this and other articles call out Watson's "stumble" -- as though they expected perfection, which is a milestone in itself.  Here's a great explanation of "what went wrong".

There are two notable things to me about this development / achievement.

The first is to ask whether this puts us ahead or behind Ray Kurzweil's schedule for 2019 (as predicted in 1999).  (Really worth reading his predictions, since we're within shouting distance!  What would you "keep / change / drop / add"?)

The second is a little closer in.   Given the pace of this development, what does it mean for us as humans / users / consumers / citizens on the one hand, and as marketers / investors, etc. on the other -- from "now" to, say, "two years out"?

Imagine for example that in two years, IBM provides access to a more generalized form of Watson as a cloud-based API.   What might you, as a person or as a business or other organization, do with a service that can understand speech, parse meanings, and optimize spending and investment recommendations based on how sure it is of the answer?

Cesar: "Watson, our lease is up soon, can you suggest some available space options nearby that would make sense for a business like Force Five Partners?"

Watson: "Cesar, here are five choices, with suggestions for what you should be paying for each, based on what I can find out right now..."

A stretch?  Apple's integrated Wolfram Alpha - based support into the Siri app for the iPhone now.  Try asking Siri, out loud: "What is the market capitalization of Goldman Sachs, divided by the US population?"   Answer back to me, in three seconds (iPhone 3GS / AT&T): 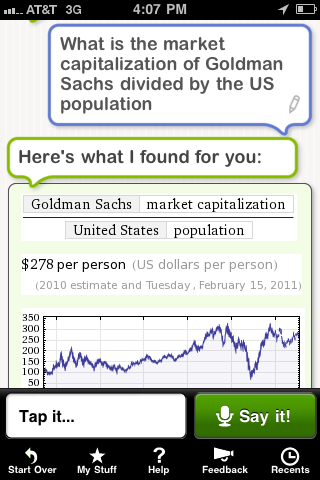 (FWIW, this hits 3 of 4 criteria in a prediction framework I suggested nearly six years ago.)

Wow.  We had barely figured out SEO, when we got slammed with SNO -- Social Network Optimization (as well as the frozen kind)!  Now we have to figure out Computational Engine Optimization?  (Confusingly, natch, "CEO" -- you read it here first!)  How do I optimize for "What inexpensive steakhouses are nearby?"   How do we even think about that?

(Possible direction: Semantic Web Optimization -- "SWO", of course.  Make sure you are well tagged-for, and indexed-by, the data stores and services where the terms "inexpensive", "steakhouse", and "nearby" would be judged.  Or, in plain English: if Wolfram Alpha looks to Yelp to help answer this question, make sure your restaurant's entry there is labeled as a steakhouse, has an accurate address, and is accurately price-rated as "$".  Whatever gaming ensues,  just don't blame IBM / Apple / Wolfram /(Google too) for going for the mega-cheddar.)

It's trite to say that change is accelerating as technology develops.  ("We're only in the second inning!")  Some dismiss this (as Arthur C. Clarke said, we always overestimate the impact of technology in the short term, but underestimate it in the long term).  But, if you doubt, this chart is worth a look.  And then think about the degree to which "social" and "mobile" are now reinforcing, amplifying, and accelerating each other...

(Insert shameless commercial:) What are you doing to help your organization keep up?

Listed below are links to weblogs that reference #Watson Wins #Jeopardy! The Singularity Is Near(er): Are You Ready for Computational Engine Optimization ("CEO")?: