All The World's A Stage, Triathlon Edition

My son Ben and I participated in the Dover Sherborn Boosters annual triathlon this past Sunday.  We really enjoyed it.  It was his first, and my first in 22 years.  Well over 300 folks competed, well-mixed in age and gender.  They seemed like a pretty competitive, well-trained bunch to us, judging by the 95%+ who had lean cheeks and wetsuits and fancy bikes and bags that said "Boston Triathlon Team".

After the race, I was curious to get a better handle on how we'd done.  All Sports Events  had done a great job of running and timing the event, and their table of results was very detailed and useful.  But I wanted to see it a bit more visually.  The All Sports Events folks were kind enough to share the data file, and with a little fiddling to parse and convert strings to times, I got to this (click on the image to launch the Tableau Public interactive visualization): Before the race, as I shivered un-rubbered on the beach waiting for the swim to start, I overheard a couple of guys my age talking about how now that they were in their forties, with their kids a little older and with more control at home and work (a state of grace I'm not yet familiar with), they had more time to train, especially on Saturday mornings.

Plotting 6th-order polynomial trend lines through the data revealed an interesting, if weak pattern that seems to confirm this life-stage effect, for both men and women.  Average performance improves radically as you move from your teens to your twenties, declines as the realities of family life intrude in your thirties, improves once again as you rediscover your inner narcissist child in your forties, and then begins to decline again as Father Time eventually asserts himself (though with plenty of variance around the mean to give us hope).  Like Shakespeare said, more or less. 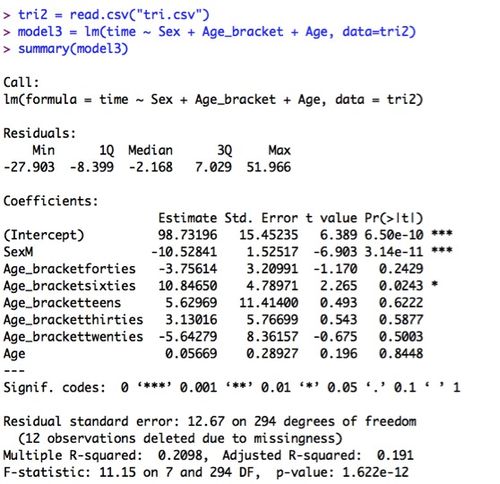 So, it helps to be a man, and under 60. Beyond that, it's likely about how hard you train, maybe your native gifts (VO2max), and possibly equipment, none of which I had data for. In short events like this, how well you can swim, and how efficiently you manage transitions, also really matter. But I didn't create variables for those in the regression.

What do you see?  Thanks again to the organizers and volunteers for a great event!

Interesting analysis, supports what I've seen over the past 4-5 years of doing triathlons. Personally I've improved each year as there is a huge learning curve for both races/skills and training. The bulk of competitors are in the 40-55 range and new entrants in their late 30's or early 40's contribute to the 'improving with age' phenomenon as most get better each year. The typical new triathlete is bored or injured from running road races and seeking a new challenge. The new athletes can improve their techniques and the sport of triathlon encourages greater fitness via cross-training. Lastly improvement occurs via better equipment as investments are made 2-3 yrs into racing and 40-ish athletes can afford the expensive bikes and wetsuits. Both myself and my training partner have gone from just under 90 minutes to mid-to-high 70's (beating the mean!) over the past 5 years due to all of the above. Definitely re-discovered our inner narcisists, however atypically both of us have children under 8, so maybe follwing your hypothesis we can move that mean down further into our 50's!