So healthcare.gov launched, with problems.  I'm trying to understand why, so I can apply some lessons in my professional life.  Here are some ideas.

First, I think it helps to define some levels of the problem.  I can think of four:

1. Strategic / policy level -- what challenges do the goals we set create?  In this case, the objective, basically, is two-fold: first; reduce the costs of late-stage, high-cost uncompensated care by enrolling the people who ultimately use that (middle-aged poor folks and other unfortunates) in health insurance that will get them care earlier and reduce stress / improve outcomes (for them and for society) later; second; reduce the cost of this insurance through exchanges that drive competition.  So, basically, bring a bunch of folks from, in many cases, the wrong side of the Digital Divide, and expose them to a bunch of eligibility- and choice-driven complexity (proof:  need for "Navigators"). Hmm.  (Cue the folks who say that's why we need a simple single-payor model, but the obvious response would be that it simply wasn't politically feasible.  We need to play the cards we're dealt.)

2. Experience level -- In light of that need, let's examine what the government did do for each of the "Attract / Engage / Convert / Retain" phases of a Caveman User Experience.  It did promote ACA -- arguably insufficiently or not creatively enough to distinguish itself from opposing signal levels it should have anticipated (one take here).  But more problematically, from what I can tell, the program skips "Engage" and emphasizes "Convert": Healthcare.gov immediately asks you to "Apply Now" (see screenshot below, where "Apply Now" is prominently  featured over "Learn More", even on the "Learn" tab of the site). This is technically problematic (see #3 below), but also experientially lots to ask for when you don't yet know what's behind the curtain. 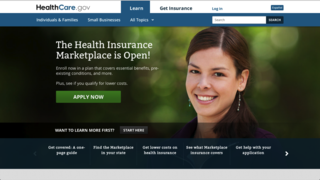 3. Technical level -- Excellent piece in Washington Post by Timothy B. Lee. Basically, the system tries to do an eligibility check (for participation and subsidies) before sending you on to enrollment.  Doing this requires checking a bunch of other government systems.  The flowchart explains very clearly why this could be problematic.  There are some front end problems as well, described in rawest form by some of the chatter on Reddit, but from what I've seen these are more superficial, a function of poor process / time management, and fixable.

4. Organizational level -- Great article here in Slate by David Auerbach. Basically, poor coordination structure and execution by HHS of the front and back ends.

Second, here are some things HHS might do differently:

1. Strategic level: Sounds like some segmentation of the potential user base would have suggested a much greater investment in explanation / education, in advance of registration.  Since any responsible design effort starts with users and use cases, I'm sure they did this.  But what came out the other end doesn't seem to reflect that.  What bureaucratic or political considerations got in the way, and what can be revisited, to improve the result? Or, instead of allowing political hacks to infiltrate and dominate the ranks of engineers trying to design a service that works, why not embed competent technologists, perhaps drawn from the ranks of Chief Digital Officers, into the senior political ranks, to advise them on how to get things right online?

2. Experience level: Perhaps the first couple of levels of experience on healthcare.gov should have been explanatory?  "Here's what to expect, here's how this works..." Maybe video (could have used YouTube!)? Maybe also ask a couple of quick anonymous questions to determine whether the eligibility / subsidy check would be relevant, to spare the load on that engine, before seeing what plans might be available, at what price?  You could always re-ask / confirm that data later once the user's past the shopping /evaluation stage, before formally enrolling them into a plan.  In ecommerce, we don't ask untargeted shoppers to enter discount codes until they're about to check out, right?

Or, why not pre-process and cache the answer to the eligibility question the system currently tries to calculate on the fly?  After all, the government already has all our social security numbers and green card numbers, and our tax returns.  So by the time any of us go to the site, it could have pre-determined the size of any potential subsidy, if any, we'd be eligible for, and it could have used this *estimated* subsidy to calculate a *projected* premium we might pay.  We'd need a little registration / security, maybe "enter your last name and social security number, and if they match we'll tell you your estimated subsidy". (I suppose returning a subsidy answer would confirm for a crook who knows my last name that he had my correct SSN, but maybe we could prevent the brute force querying this requires with CAPTCHA. Security friends, please advise.  Naturally, I'd make sure the pre-chached lookup file stays server-side, and isn't exposed as an array in a client-side Javascript snippet!)

3. I see from viewing the page source they have Google Tag Manager running, so perhaps they also have Google Analytics running too, alongside whatever other things...  Since they've open-sourced the front end code and their content on Github, maybe they could also share what they're learning via GA, so we could evaluate ideas for improving the site in the context of that data?

4. It appears they are using Optimizely to test/ optimize their pages (javascript from page source here).  While the nice pictures with people smiling may be optimal, There's plenty of research that suggests that by pushing much of the links to site content below the fold, and forcing us to scroll to see it, they might be burying the very resources the "experience perspective" I've described suggests they need to highlight.  So maybe this layout is in fact what maximizes the results they're looking for -- pressing the "Apply Now" button -- but maybe that's the wrong question to be asking!

Food for thought (scroll to bottom).  How does this happen?  Software engineer friends, please weigh in!

Listed below are links to weblogs that reference Unpacking Healthcare.gov: