Here are some discussion questions we're considering.  What's your "keep / change / drop / add" to this list? And, please take the poll at bottom!

1. How do you define "attribution analysis", and in particular, how do you distinguish it from media mix modeling?  Where are the boundaries with "CRM"? Is it just a question of the fineness of the degree to which you can relate media effects to each other?

2. Everyone's got a poster child example or case study that illustrates the potential of multi-channel attribution analysis.  For each of you, what's your poster child?

3. What are the practical limits of the utility of this analysis, and what's behind those limits?  Put another way, at what point do you see diminishing returns to investments in attribution analysis, and why?

4. Let's talk techniques for a moment, since the session description promised we would.  What particular approaches to data integration or to statistical analysis do you find robust enough  for real-world use, and which ones are still too fragile to make work in most cases?

5. Some people approach attribution analysis as a capability-building exercise -- if we build it, they will come -- while others come at it from a tight, hypothesis-driven focus about where the value might lie, and in what sequence it might best make sense to explore connections.  What do you need to know about a client to suggest which way, or what mix of the two, might make sense for them?

6. What are some principles and tactics for the governance of attribution analysis -- things like reconciling metrics and comp with the global optimization it implies -- that make sense here?  Can you tell any stories about how these have been developed and applied?

7. What kind of experience, training, and topical education does it make sense for marketers to have, to fully take advantage of this?

8. How do you operationalize this analytic capability -- how do you make sure we move beyond insight and apply, either manually or even in automated ways, the directions the analysis suggests?  And, how does this prospective operationalization [warning: mouthful!] affect the analysis you consider doing, in turn?

9. Let's build the ideal RFP for attribution analysis efforts, to help our clients out.  What's in it?  What shouldn't be?

10. What's your recommended reading list for learning about and following this field?

I'll be moderating a panel at the OMMA Metrics & Measurement Conference in San Francisco on July 22.

The topic of the panel is, "Modeling Attribution: Practitioner Perspectives on the Media Mix".  Here's the conference agenda page.

How do you determine the channels that influence offline and online behavior and marketing performance?

How should you allocate your budget across CRM emails, display ads, print advertising, television and radio commercials, direct mail, and other marketing sources?

What models, techniques, and technologies should you use develop attribution and predictive models that can drive your business?

Do you need SAS, SPSS, and a PhD in Statistics?

What about multiple logistic regression?

What is the impact of survey and voice-of-the-customer data on attribution?

Hear from experts who have to answer these questions and tackle these tough issues as they work hard in the field every day for their consultancies, agencies, and brands.

So far, Manu Mathew, CEO from VisualIQ, and Todd Cunningham, SVP Research at MTV Networks, will be participating on the panel as well.

Hope to see you there.  Meanwhile, please suggest questions you'd like to ask the panelists by commenting here.  Thanks!

Here are some of the questions we thought to cover:

Suggestions for questions welcome -- just email me via the link at left.

Postscript:  a recap of the panel on the MITX blog

By this point, many of you will be familiar with some of the more interesting and exotic examples of "integrated cross-channel product experiences", such as the Nike+ product/ service/ community.  But the approach has gone mainstream too.  Here's a recent example I experienced:

I went with my family to the "99" Restaurant in Centerville, on Cape Cod in Massachusetts (the one on Route 28).  Lying on the table was a pad of these forms:

I texted my information in, and 24 hours later this appeared in my inbox: 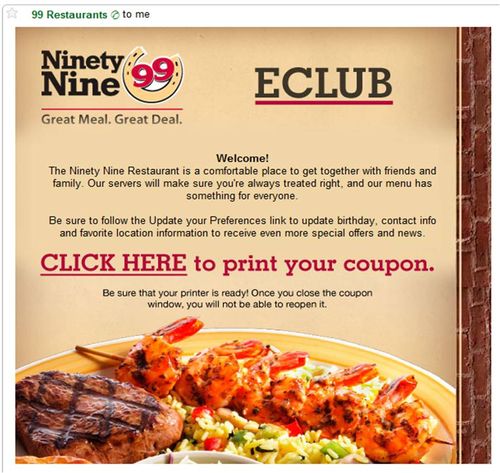 Store to text to email to web to store, all nicely connected.  Cool!  Hope we're back before it expires.  Otherwise we'll have to sacrifice another family member's phone.  (Maybe do that anyway, and ask for separate checks... Hey, times are tough!)

This program is run soup-to-nuts for the "99" by an external service called Fishbowl Marketing.  It's pretty good! I'm hoping to speak with them about experiences and results with it.

What's your favorite example?  Hope to see you tomorrow morning!

On the morning of April 29 I'll be moderating a MITX panel discussion titled "Integrating Cross-Channel Customer Experiences", in Cambridge, MA (Kendall Square).  More here, more posts to follow.  Hope to see you there!

I'll be in St. Paul, Minnesota on September 21-23, presenting at the "Action Analytics: Setting A National Agenda" Symposium hosted by Minnesota State Colleges and Universities (MNSCU) and by Capella University.  (Notes on the conference to follow.)

At Kate Ehrlich's invitation, I gave a one-hour talk yesterday at IBM Research and the Center for Social Software titled "Structured Collaboration in Social Media: Design for Analytics".

The presentation made three main points:
The presentation included a survey and evaluation of the social marketing landscape today, and described two important shortcomings that limit what marketers can do with it:
The presentation then described and illustrated "Structured Collaboration" principles, and talked about how marketers like Nike are realizing significant results through initiatives that reflect them.  Then, we discussed how the design of these initiatives can reveal segmentation and targeting insights much more readily than the typical application of marketing analytics to conventional social media.
Finally, the talk offered some existing examples for how to exploit these principles cheaply, as well as some ideas for how several firms could apply them to realize their own versions of what Nike, and more recently others like Fiat, have done.
Thanks once again to Kate, Ethan, and Irene, and to all their colleagues for participating!

From Pete Krainik, this recap of the presentation Perry Hewitt and I delivered at The CMO Club Boston dinner last Tuesday evening, complete with video.

Here's Perry's version, including our presentation via Slide:

The CMO Club 11 11 08
View SlideShare presentation or Upload your own. (tags: cgm ugc)

Jerry Mechling's invited me to present to his Leadership For A Networked World class (STM-480) on Monday at Harvard's Kennedy School of Government on Monday.  Here's the abstract for the session:

"As the election season draws to a close, some have noted that the campaigns, and in particular the Obama campaign, have assembled enormously powerful assets in the groups they have assembled and facilitated through their web operations. (It’s interesting to note that they haven’t used particularly exotic technology to do this, but rather have focused their efforts and resources on facilitating a ‘think global, act local’ approach to presidential politics that harkens back to the old ward system.)

As a leader in the public sector, one question this raises for you is how you too should move beyond “online, not in line” applications of information technology in government, toward applications that support higher “civic engagement” after the voting is over. Let’s define the objective: by “civic engagement”, we mean involvement in civic affairs by an informed polity, where “informed” means an awareness and understanding of individual issues and of the trade-offs among them, and where “involvement” means constructive evaluation and advocacy in ways that make the ultimate actions of government better and more fair. Assuming you aren’t a closet monarchist, fascist, anarchist, etc. and think this is a good idea, what should your agenda be?

One way to think about this is to have a simple framework for the mechanisms you need. What should you do to get good civic engagement? Elements might include:

The objective of this class will be to help you be aware of what's going on and begin to assemble your own agenda. Questions each of you may face will include:

Here's one of my favorites -- New Zealand's Police Act Wiki.  (Congratulations to Simon Heep, Michael Utton, William Ool, and Susan Hanks, for their leadership on reducing speed limits on South Island roads, and to other major contributors!)  Have any other examples you feel are instructive?  Please let me know.

My friend Perry Hewitt, who is the CMO at Crimson Hexagon, kindly asked me to join her in presenting a talk titled "From Communications to Conversations: Understanding, Managing, and Embracing UGC" at the CMO Club of Boston dinner on November 11, 2008.

Last week I attended and gave a talk at "Carlson On Metrics", organized by Professor Rajesh Chandy  and the staff at the Institute for Research in Marketing at the University of Minnesota's Carlson School of Management.

Prof. Chandy on the "Why?" for the conference:

Here are some notes on the talks (comments very welcome!):